Data-driven insights on nailing PR for your Series A round

One of the first PR campaigns most startups experience is the one linked to their first funding round.

Whether you’re a seasoned serial founder with an enviable media contact book and record-breaking Series A round, or just getting your head around how to do PR for your first startup. the end goal is the same: to leverage your round and create some buzz around it.

How you achieve that goal, however, can feel overwhelming. With the European VC deal value in the first six months of 2021 already passing €47.1 billion and quickly breaking last year’s record, the competition for media attention for early-stage startups has never been more challenging.

Caption: Cheers Ryan for giving us the permission to use this nugget of a tweet

To understand the current state of the European startup press coverage, we embarked on a month-long press tracking expedition. As a team of two who are tasked with supporting Nauta’s portfolio companies with their PR, we wanted to have an arsenal of insights and tips to share with portfolio founders and their marketing leads during their funding announcements.

To achieve this, we monitored three outlets – TechCrunch, Sifted, and Tech.eu for a period of 4 weeks in early spring 2021.

Disclaimer: Of course, there are many other great tech-focused media outlets in Europe, and ideally, we would have loved to expand the scope of the data collection but due to time constraints, we opted to track the three most requested outlets by our portfolio.

During the four weeks, we tracked over 200 funding announcements that had press coverage. To keep the focus on the European startup scene, we omitted the non-European funding announcements and focused on Seed to Series B rounds only – leaving us with just under 100 clippings which is the basis of the following insights.

We hate to be that ‘guy’, but when it comes to the press coverage for funding announcements, size really does matter.

During our deep dive across the three tech-focused outlets, we found 70% of funding related coverage were about rounds that were over £5 million with a median size of £15M+ across the three outlets as shown in the graphs below. 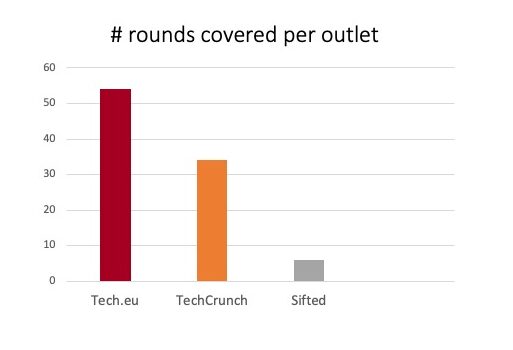 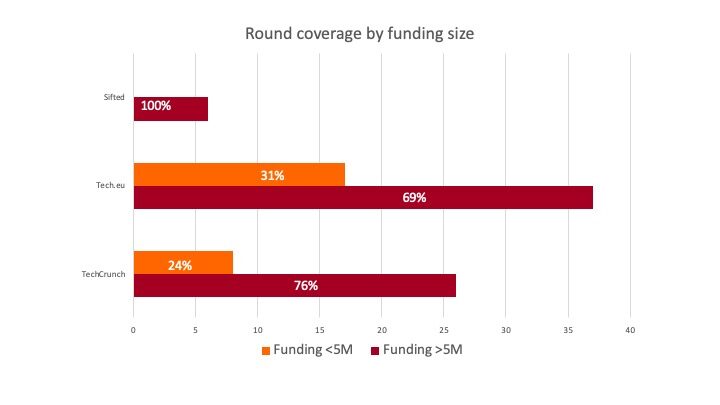 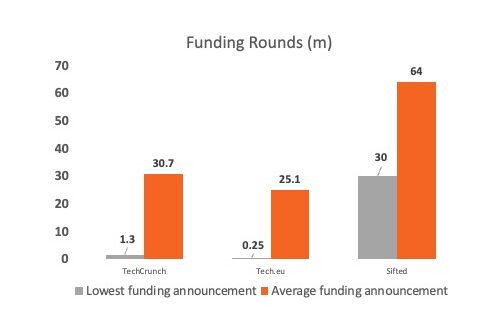 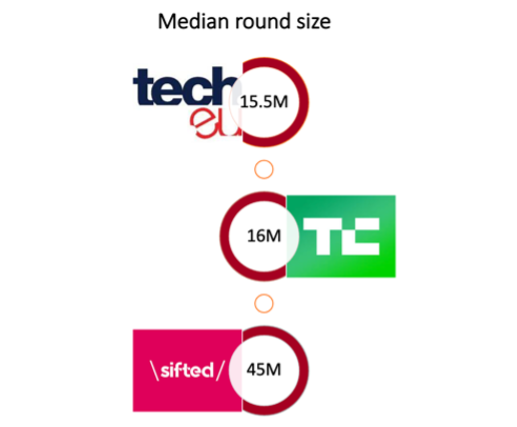 There are some pre-conceived assumptions that most of the coverage tends to favour B2C startups due to their obvious mass-market appeal. However, this assumption was quickly invalidated with the results largely reflecting Europe’s B2B stronghold whereby 64% of Tech.eu’s coverage focused on B2B funding rounds while 59% of European funding rounds covered by TechCrunch were B2B.

As Fintech and startups leveraging AI for a myriad of enterprise solutions are two of the most funded tech verticals in Europe, it’s fairly clear why they also dominated the tech press news cycles.

Europe is full of startup hotspots; therefore, we recorded a mixture of Pan-European funding announcements.

That said, there are two countries that were prominently featured – with UK startups landing the most press mentions (38% and 37%), closely followed by German startups (12% and 17%). Interestingly, Netherlands took the third spot for both outlets over other European startup heavyweights such as France and Sweden.

With both of the top two countries benefiting from thriving startup ecosystems – having been ranked #1 and #2 as Europe’s leading startup hubs – their level of media attention mirrors the overall funding landscape.

While we tracked Sifted during this exercise, it’s obvious we were unable to gather enough data points to fairly compare it to the two other outlets.

This is primarily due to Sifted’s differentiated editorial focus on features rather than on news. In fact, during the entire month, Sifted published 6 funding announcements with an eye-watering £45 million as their median round range.

This leads us to our fourth insight: get a sense of an outlet’s editorial focus before you pitch them.

Tips on securing coverage for Seed & Series A Rounds

Now that we’ve shared the data if you’re wondering what you can do to improve your chances of landing that first big splash, below are some best practice insights and tips that we hope will help early-stage founders navigate their first PR experience.

Focus on storytelling without the jargon

Let’s first start with how you tell your story to a journalist. It may seem like a good idea to pack your pitch email or press release with big buzz words and technical product descriptions, but that is a turn-off for both journalists and their readers.

Instead, learn to articulate your startup’s solution, purpose and vision in a compelling way.

As an early-stage founder, your founder journey or what inspired you to tackle that particular problem is your strongest weapon — so use it and make it part of the story. When it comes to storytelling; an engaging origin story will outlive product descriptions and growth metrics.

And most importantly, find a relevant hook to demonstrate why the news is interesting and relevant to someone besides your immediate stakeholders, then lead with that.

Get to know your target outlet’s focus and individual journalist’s beat (industry focus,  stage, geography, news vs feature writer etc) before you even craft that first pitch email.

Most journalists are very straightforward about the type of stories they like to cover and how they like to be approached. Considering they’re inundated with pitches on a daily – some relevant and some way off the mark – by researching their focus prior to your outreach, you’re respecting their time and your time.

What’s more, if you’re a European HQ’ed startup, it is more relevant to reach out to a European tech-focused writer/outlet than trying to get on the radar of the U.S. press.

Did you know many journalists are very vocal about their PDF and attachment pet peeves? According to many, a well-crafted pitch email summarising your big news with the press release pasted is the best way to slide in their inboxes.

And while we are on the topic of press releases, their purpose is to share the most relevant news concisely and factually so don’t be tempted to write them as you would a marketing copy (yes, that means no bluff, buzz words, or hyperbole) and be prepared to answer follow-up questions.

What’s more, not everyone likes them so do some research on each journalists’ preference.

Don’t be tempted to ‘hack’ the pitching process

We understand that founders and small in-house comms teams are under pressure and often wear many hats, but mass emailing all those journalists won’t win you any favours.

Similarly, be mindful of how many pitches a writer receives each day and how heated the current funding landscape is. Be prepared to give adequate time for them to consider your news and be flexible enough to work on a mutually agreeable date.

Also, take newswires and PR agencies promising mass coverage with a pinch of salt. The harsh reality is that as a Series A and early-stage startup, your company has not reached mass recognition for your news blast to be picked up by big news outlets.

Build your channels and community

News cycles move incredibly fast and, in most cases, your actual customers do not read outlets that cover funding announcements.

To make the most of this big milestone, don’t forget to prepare a list of industry-specific outlets, blogs, podcasts etc whose target audience aligns with your target customers.

What’s more, prepare a range of communication messages you can share in your owned channels (website, newsletter, social media, even that family/network WhatsApp group!) and be ready to amplify, distribute, and re-purpose that news.

Whether you’re one founder or four co-founders, you need a professional group photo in landscape and vertical in addition to individual photos of the founders.

Here is a painfully fantastic article from Tech.eu’s Dan Taylor on the mishaps to avoid.

Remember it’s a marathon, not a sprint

We’ve seen time and time again that founders who nail their story in a relatable way while articulating focused opinions and insights, manage to stay on the press radar long after their funding announcements.

Why? Because those founders understand that PR is a marathon, not a sprint.