The world seems to be in turmoil. After the longest bull market in history, lasting almost a decade, our economy has been impacted by several different crisis all happening within a short period. This has been no different for venture funding which has seen a sharp decline in 2022, despite a record number of active venture capital funds and a never-seen amount of committed, but unallocated capital.

Economic uncertainties have also impacted funding in commercial open-source (COSS) companies. However, the industry has proven to be resilient and has fared much better than other verticals.

2021 was a record year and a fantastic year to fundraise. Entrepreneurs across all industries raised a staggering $588B (source) in venture capital, up from $269B in 2020. This represents a 2.2x growth in total amount of venture funding. And it was no different for open-source software start-ups. COSS founders collectively raised $13.4B in funding, which represents approximately a 4x year-on-year growth. Commercial open source has become a hot industry!

The first months of 2022 started at a similar pace with mega-rounds from companies like Starburst ($250M Series D)  and dbt lab ($222M) . However, the crisis kicked in and overall venture funding dropped by approximately 20% in H2 2021. Facing an uncertain future, a more pessimistic (or maybe realistic) world view has entered the venture capital industry.

While COSS venture funding has also been impacted, the decline (13.3%) has not been so prominent. As a standalone the number may seem alarming, but let’s not forget it’s 35% less than the overall market. Facing challenging macroeconomic market conditions, COSS businesses have shown remarkable resilience. 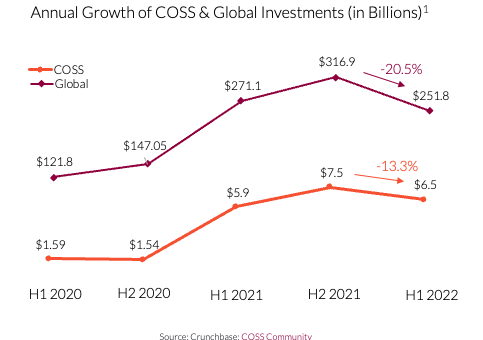 The commercial open-source market is faring relatively well in a world full of crisis. As more and more enterprises adopt the technology, there is a great potential for European COSS start-ups in this space to become the next wave of unicorns.

Interested in talking to us about open source? Join our event on 9 November in Berlin.