Why Open Source is Eating Europe

Some good stories start with a printer. And as it often happens, stories with a printer end up in frustration. This particular story of Open Source starts in the 1970s with a cutting-edge prototype laser printer the Xerox Corporation had donated to the Massachusetts Institute of Technology’s Artificial Intelligence Laboratory (AI Lab) and a young (now infamous) Richard Stallman frustrated by constant paper jams. When Stallman wanted to write a small program sending out a warning message in case of printer problems, he found that the Xerox had provided software files in precompiled, or binary, form – near impossible to read and use.

This experience (and his subsequent attempts to get the original source code) had made a lasting impression on Stallman. The early hacker culture started to wane in the late ‘70s and early ‘80s and proprietary software slowly became the norm. As answer to this trend, on September 27, 1983, Stallman announced the GNU Project with the goal to give computer users freedom and control in their use of their computers. Born was the first Free Open-Source (FOSS) project.

Since the ‘80s, things have developed considerably. Born out of Stallman’s free software philosophy, the open-source movement has been taking the world by storm. Open-source projects like Android, Linux or Firefox have become household names and successful companies like Mozilla, WordPress and Elastic have been built on top of open-source software (OSS). We at Nauta believe that the transformative power of open source is still underrated and expect an effect similar to how Software-as-a-Service (SaaS) changed software distribution in the last decade.

No Niche: Status Quo of the OSS Market

Open-Source software is already the most important component of a company’s software stack:

For businesses, this is a massive market opportunity:

Technologies like Git and Mercurial and corresponding platforms have made sharing and collaborating on code seamless:

Successful companies have written the playbook

By now, the world has seen several success cases among the commercial open-source (COSS) companies.

If you want to start or run a business based on open-source software, you may choose between battle-tested monetization strategies. See below, three different, yet often combined options to successfully commercialize on an open-source project.

A great example of a successful open-source company is Elastic. The open-source project elasticsearch has been started by Shay Banon in 2010. I have experimented with elasticsearch for the first time end of 2011 and I still remember how truly amazed I was by the simplicity of usage of this great database.

The company around elasticsearch got incorporated in 2012 by the founding team Shay Banon, Steven Schuurman, Uri Boness and Simon Willnauer and, shortly after, was able to raise funding by Benchmark. In 2013, the company acquired Kibana and Logstash and the famous ELK (elasticsearch, Logstash, Kibana) was formed.

The company went public in 2018 and by 2021 it was at a $10.7B valuation (although this number has been fluctuating drastically recently).

As we have seen the growth of successful COSS enterprises in the last decades, the ecosystem is maturing considerably. This is demonstrated nicely by the growing amount of capital invested in open-source companies. 2021 has been especially crazy – in Q1 alone, the funding of open-source already reached the total amount of the previous year. 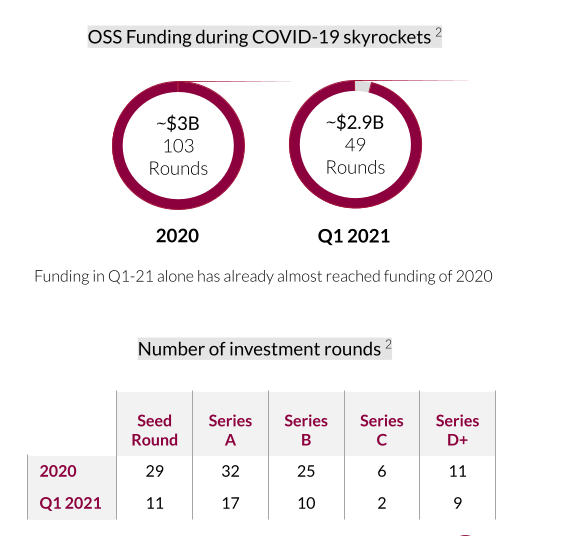 In general, we see a clear upward trend in venture funding of commercial open-source companies. It is interesting to see how the general (aka mostly US-based) venture capital market compares to the European one. While in Pre-Seed and Seed stages, the average round sizes worldwide and in Europe are very similar. The situation changes considerably starting from Series A upwards – later rounds in Europe are significantly smaller (see data below). 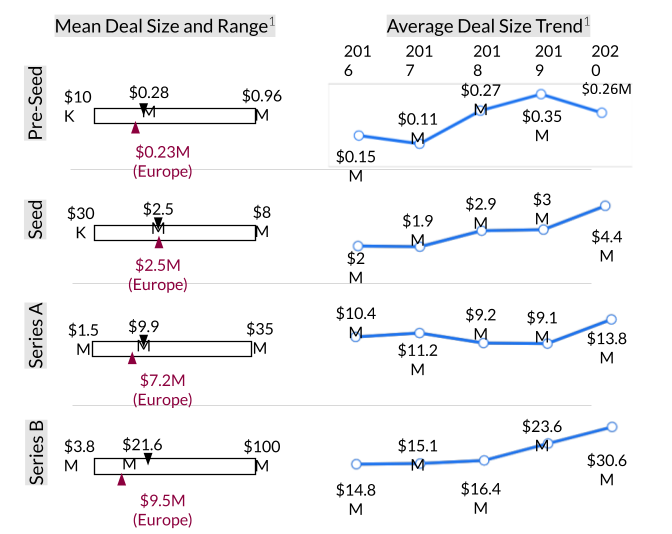 This is probably the main reason, why later-stage commercial open-source companies tend to move their headquarters to the US.

European developers are strong contributors to the open-source community. Germany and the UK are, along with the US, among the top 3 countries in terms of open-source commits. It comes as no surprise that we see many successful open-source companies coming from the old land. For example, below is a selection of venture-backed start-ups that have received a funding of $5M. Worth noting that all companies marked with a * have shifted their headquarter to the US (see above).

With constant new funding rounds, the image above had to be updated several times in the last months and will almost certainly be out of date as you read this.

And even more start-ups are entering the market. Find below a list of promising European COSS start-ups (with a funding of less than $6M). (Disclaimer: this is a non-complete and subjective list and obviously reflects Nauta’s geographical focus on Germany, UK and Spain.)

Attractiveness of the European COSS Market

Recent trends strengthen the European Open Source Scene. The proliferation of remote work makes customers, employees and investors care less about the location of OSS companies, which will likely decrease the power of OSS hubs in the US. Furthermore, proven COSS business models and high exit multiples are attracting more and more VCs.

Overall, there are many indications that the European COSS market is very attractive and that the number of European COSS companies having to relocate to the US will be decreasing in the near future.

For the last 15 years, we have been investing in European B2B Software companies. We know that European COSS companies are exciting and we at Nauta are very bullish on the entire space. Find below some key points of our investment thesis:

We also see that there are several drivers increasing the OSS adoption:

Open-source software has led to a faster and plainly better way of building software. To a large degree, it has fueled the mindboggling development we have seen in tech industry in the recent decades. People unlock value by working together and are motivated to contribute to a common project. They play a positive-sum game in which, in the end, everyone will be a winner.

Are you planning to or did you start a commercial open-source company? Get in touch! We would love to chat with you and get to know more. Feel free to reach out to markus.duettmann@nautacapital.com (or any of my colleagues at Nauta).